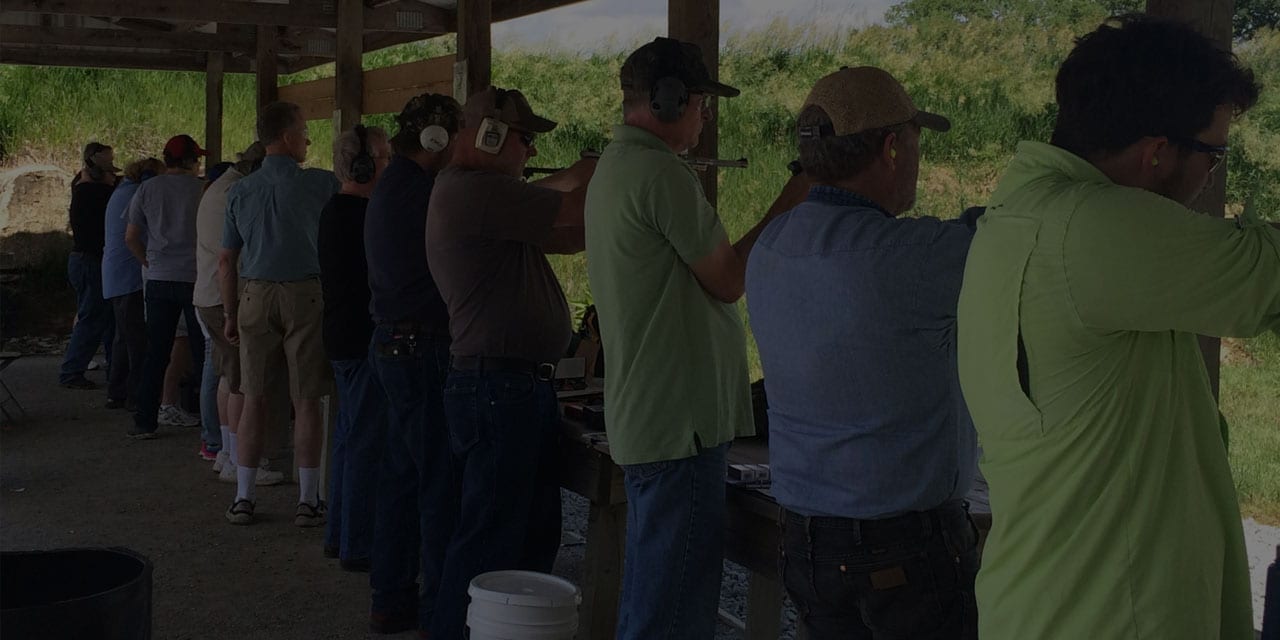 Eye and ear protection required for all shooters and spectators

Bowling pin shooting is a shooting sport for handguns in which the competitors’ race against one another to knock standard bowling pins from a table in the shortest elapsed time. Pin shooting is often described as one of the most enjoyable shooting games and one of the easiest means of introducing a new shooter into regular competitive shooting. Pin shooting appeals to both genders and youth.

Pin shooting is conducted with both revolvers and semi-automatic pistols in calibers ranging from .22 Long Rifle to .480 Ruger, and others. Bowling pin competition is often recognized to be a big-bore event in which large caliber or high-power handguns such as the .38 Super, .357 Magnum, 10mm, .41 Magnum .44 Magnum, .45 ACP, .45 Colt and other large-bore handguns have the greatest advantage in removing the pins from the table.

Quite challenging. Lots of fun. Usually is fired about Noon on a Saturday in June and July. It is helpful to attend the Pistol Marksmanship Class ahead of time for some basics. It is also helpful to make sure that your pistol likes your .22 ammo, as malfunctions harm your score a lot, but not your fun. Rapid Fire was fired in the first modern Olympics in 1896 and has been fired every quadrennial since. USA Shooting web site and give you more information.

Five sighters. Then six series of five shots in up to six minutes Precision, one handed, at a bullseye type target.

Five sighters. Then six series of five shots at a turning type target that faces for three seconds, then edges for seven, then faces again, etc. One shot only as each target faces. Equipment is a .38 revolver or 9mm pistol.

To help you prepare for this event, we have a marksmanship clinic in late May, a June practice match, to prepare for the July event, usually fired on a Saturday morning about the third or fourth weekend in July.

The Top Ten Marksmen get a patch, pin, and certificate signed by the Governor signifying membership in this elite club. This is fun, but we want the best shooters in Nebraska to participate.

This event has all elements of marksmanship: precision, combat, PPC, IPSC, beer cans or bottles on the river.

The pistol used must be in caliber .22 Long Rifle ammunition, may only be loaded with one round at a time, and have conventional "open" or "iron" sights (i.e. optical and laser sights are not allowed). It must also be held and operated by one hand, and not supported by any other part of the shooter's body. Apart from that, there are practically no rules for the pistol. Trigger weight less than 22 kilograms and be discharged with the same hand that holds the gun up. Precision pistols with long barrels, grips fitted to the shooter's hand, very light trigger pull, etc., are often themselves called free pistols. The bulls eye is about the size of your little finger nail at 50 feet and about the size of a 50 cent piece at 50 meters.

The course of fire is 60 shots within a maximum time of two hours.

These are CMP sanctioned rifle matches using the M1 Garand rifle and any country’s vintage bolt rifle. Both matches are fired with ‘as issued’ rifles and both are fired at 200 yards. While not required, most shooters use a shooting mat, scope and stand, shooting coat and shooting glove. Equipment for this match is typically acquired over time and no one shows up with everything right away.

This is a 35 round match with five sighter shots allowed at the start of the match. CMP rules state the rapid fire stages will begin from the standing position and drop down into the prone position before chambering a round. With the Garand that will be with the bolt closed on an empty chamber. With the bolt rifles, that will consist of the bolt left in the open position. Once in position, a shooter will either operate the action on the Garand or close the bolt on a bolt rifle.

Slow fire stages are 10 minutes for 10 rounds and all firing is single loaded. The rapid fire stage is 80 seconds (both Garand and bolt) for 10 rounds with the requirement that time starts from the standing position and a reload is required. The Garand is loaded ‘2 & 8’ and bolt rifles are loaded ‘5 and 5’.
Normally WWGC shoots these two matches on the same day with the bolt match following the Garand match. Shooters can shoot either one of both.
(This match is the Course ‘A’. An alternative is the Course ‘B’ which is a 50 round match. For the Course ‘B’, there are 5 sighters, 20 shots slow fire prone, 10 shots rapid fire prone, 10 shots rapid fire sitting or kneeling and 10 shots slow fire standing. All rapid fire stages start from standing).

This is an NRA sanctioned rifle match primarily using the AR15 although more shooters are using their M1A rifles. Both are acceptable. Most competitors shoot in the ‘Service Rifle’ category. Rules do change occasionally and AR15 rifles can now have shorter barrels (16”), scopes (4.5 max) and collapsible stocks. Some still shoot their rifles meeting the prior rules which required solid A2 stocks, 20” barrels and iron sights. A ‘Match’ class is also available and these are basically more highly refined rifles. All are shot together as distances, time and round count are the same. While not required, most shooters use a shooting mat, scope and stand, shooting coat and shooting glove. Equipment for this match is typically acquired over time and no one shows up with everything right away.

This is a 58 round match with two sighters allowed prior to each string of fire. All shots are fired at 200 yards at WWGC as we do not have the room for the 600 yard firing line. Official NRA targets are used with official, reduced replacements to simulate the 300 yard stage and the 600 yard stage.

Slow Fire stages are 10 minutes (20 minutes for 20 rounds) for each string of fire and rifles are single loaded. Rapid fire stages are 60 seconds for Sitting and 70 seconds for Prone with a required mag change. All stages of fire are begun from the appropriate position. Magazines can be loaded ‘2 and 8’ or ‘5 and 5’.
An alternative for this match is an 80-round match with the only changes being the above 10 round stages are replaced with 20 round stages.

You will need 300-400 rounds of .22 pistol and a box of centerfire fire pistol ammo. Other useful aids are pen and pencil, notebook, shooting glasses and hearing protection, spotting scope or binocs are helpful, screwdriver, cleaning rod, stapler and masking tape, and water.

The CMP has two different pistol events that are run by the WWGC.

The CMP .22 Pistol event allows almost any .22 pistol or Revolver.

Then six series of five shots at a turning target that faces for three seconds, then edges for seven, then faces again. We shoot that in June and July usually on a Saturday morning. This has elements of Precision, bowling pins, combat, beer cans or bottles, PPC, and IPSC.

Standard pistol is shot with a .22 pistol. Sixty shots total for score plus five sighters to start.

This can be shot with almost any .22 pistol. Most shooters use a Ruger, or S and W Model 41 or High Standard. Any .22 caliber model pistol can be used.
This event is open to anyone. Men, women, novices, juniors.

Match takes about 30 to 40 minutes for each relay.

The Centerfire match and the .45 match is identical.
B-6 targets at 50 yards, Slow Fire. B-8 Targets at 25 yards, Timed and Rapid Fire.

This is a Precision event that requires excellent equipment, ammo, and strength, concentration, endurance, focus, single-mindedness of purpose, and determination.

All firearms must be cased when moving between stages.

Rimfire Challenge matches have become very popular and the original intent was to design this match for the entire family. This is a two gun match and requires a .22 cal rifle and a .22 cal handgun. Only .22LR is allowed.

All targets are reactive steel of different sizes and shapes. We use eight stages of five targets each. There is a maximum time limit of 30 seconds allowed per run. At each stage the shooter will engage the five targets in any order but a designated “stop” target must be engaged last. The shooter will shoot each stage five times and each run will be timed. The slowest time for each stage will be dropped and the remaining four totaled for the score. All shooting is done from a stationary position: no movement is allowed. All shooters are divided into groups (squads) with different starting/ending stages.

Four of the stages will be for rifle and four for handgun. Target distance will vary for each stage but the minimum is seven yards (handgun) and the maximum is 35 yards (rifle). Magazines are loaded with a maximum of 10 rounds, and it is recommended, but not required, to have five magazines. Reloading will not be part of the shooters time and if a shooter does not have five magazines, he/she may have another shooter in the group reload for them while they are shooting. This is a minimum 200 round match but plan on bringing extra ammo; everyone has misses.

Firearm classifications are as follows:

The Carbine match is for the ‘as issued’ M1 carbine but other rifles are allowed. All firing is from the 100 yard line and most shooters use a shooting mat, scope and stand, shooting coat and shooting glove although none of this is required. This equipment is typically acquired over time and no one shows up with everything right away.

This is a 40 round match plus up to 10 sighters allowed, in a 10 minute time frame, at the start of the match. Unlike other CMP matches, the rapid fire stages start in position, not from the standing, with an empty chamber, and the shooter chambers a round after start command.

All magazines are loaded with five (5) rounds for all strings of fire.

The 50-yard match is followed by the 300-yard match. (it is your discretion to shoot one and/or both matches)

Three positions are conducted with an equal number of shots fired from the Prone, the Standing and the Kneeling positions, always in that order. Each of the three positions shot during the match has a fixed time limit that the shooter is able to shoot unlimited numbers of sighting shots and 10 or 20 shots for record. In most scenarios the scoring is on a 1-10 scale.[1] The center of the bullseye is commonly the 10 and the score drops points as it distances from the center.

Learn the basics of the M1 Garand, its related equipment and shoot in a match setting. We will cover loading, sight picture, trigger control, breathing, proper sling use, Natural Point of Aim, proper positioning and more. We will also discuss maintenance, care and cleaning and demonstrate some optional match equipment. This clinic typically lasts six hours and will conclude with a 35 round regulation match.

Match Director – Steve Gaebel
May membership meeting is canceled. Contact us for more information.CONTACT US
+